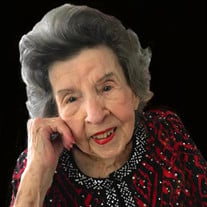 FORT MEADE - Elizabeth Aleene Albritton Mayo,103, entered into the presence of the Lord, November 27, 2020 in Lakeland, FL. She was born January 14, 1917 in Fort Meade, FL to Walter James and Mary Belle Moose Rivers. Mrs. Mayo was affectionately known to many as Aleene, but over the years most called her Nana. She was always young at heart, remaining active well into her nineties, never seeing herself as getting older. Aleene lived in Fort Meade for most of her life, in the same house she watched her dad and granddad build when she was 8 years old. She later moved to Lakeland to an assisted living facility to be near her daughter and family. The last 5 months of her life were spent at her daughter’s home. She was a very gracious and active southern lady who was a lifetime member of the First United Methodist Church of Fort Meade. She was delighted when the church honored her as the oldest living member during their recent 150th anniversary. Always an active church member, Aleene helped to prepare many church meals and was known for her delicious food, amazing cakes, and pies. Through the years, many friends and neighbors were recipients of extraordinary dinners or desserts from Aleene, accompanied by beautiful bouquets of roses from her garden. Aleene attended Fort Meade High School, and was the consummate Home Room Mother throughout her daughter’s schooling. She was a talented gardener who loved working in her yard and rose garden, and was a lifelong member of the Fort Meade Garden Club where she won awards for her lovely orchids. She was also a member of the Fort Meade Historical Society. A proud, lifelong resident of Fort Meade, Aleene loved her hometown so much that on her 100th birthday, the City of Fort Meade issued a proclamation naming her the best Ambassador the city had ever had, and declared March 14, 2017 as “Elizabeth Aleene Albritton Mayo Day”. A loving wife, mother, grandmother, and great-grandmother, Aleene adored her family and all the special occasions they celebrated together. Her other love was the Florida Gators, and she loved her "Gator Nana" nickname. She would continue to dress up in orange and blue to cheer the Gators on as she watched them on TV right up until the end of her life. Aleene is survived by her daughter, Mary Ann DeLoach and husband Ed, granddaughters, Michelle Dias and Stephanie Girard, grandchildren in heart Debra DeLoach McQueen (Robert) and James E. (Buddy) DeLoach, Jr. (Susan), great grandchildren Luke and Joshua Dias, Zoe and Zeke Girard, several great-grandchildren in heart, as well as loving nieces and nephews. She is preceded in death by her parents; husbands R. Bruce Albritton and Lawrence S. Mayo; brothers Hal N. Rivers and Norman F. Rivers. In addition, Aleene was loved and cared for by 4 wonderful ladies over the last several months of her life, and the family wishes to express their eternal gratitude to Sharifa Ali, Theressa Hadley Glover, Vaillajon Louisjeune, and Dana Villette. A Celebration of Life will be held on Friday, December 4, 2020 at 10:30 a.m. in the Prayer Garden of the First United Methodist Church, 135 East Broadway, Fort Meade, FL with Dr. David C. Moenning officiating. A private family interment will be held prior to the service in Evergreen Cemetery, Fort Meade. It is requested that masks be worn and general rules of distancing applied. In lieu of flowers, memorial donations can be made to First United Methodist Church, 135 E. Broadway, Fort Meade, FL 33841 or Good Shepherd Hospice, 3470 Lakeland Hills Blvd., Lakeland, FL, 33805. Hancock Funeral Home, Fort Meade, FL 863-285-8171

The family of Mrs. Aleene Albritton Mayo created this Life Tributes page to make it easy to share your memories.

Send flowers to the Mayo family.