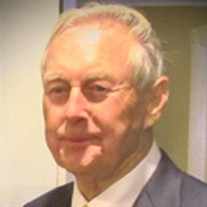 WINTER HAVEN – Mr. Billie Buchanan Garrett, 96, passed peacefully into Heaven on Monday, October 19, 2020 in Lakeland, FL. Billie was born June 13, 1924 in McKenzie, TN and grew up in Gleason, then entered the U.S. Army where he served as a tank gun operator during WW II. Billie saw battle in Western Europe in the 1st army, 2nd Tank Battalion, 9th Armored Division, and his unit received military honors for its service at the Battle of the Bulge and for the capture of the bridge at Remagen, where his unit was awarded a Presidential Citation from President Roosevelt. Following his military service, he entered Murray State University in Murray, KY where he received a Bachelor of Science degree in Agriculture in 1949. During his tenure at Murray State, Billie met Merry Wadsworth and upon graduation they moved to Winter Haven, FL to begin a new life together. Billie was a resident of Winter Haven since 1949 where he was an agricultural business entrepreneur in the citrus industry of Central Florida. He remained true to his alma mater where in 2011, Billie and Merry Garrett provided tremendous generosity and unwavering support for the Hutson School of Agriculture and Murray State University and allowed them to purchase land and construct a new research center which was named in their honor. He was a citrus grower, and longtime fertilizer sales representative for several fertilizer companies throughout his life. Billie’s first job was with Virginia Carolina Chemical Corp., then later Swift Fertilizer of Winter Haven and Harrell’s Fertilizer in Lakeland, Florida Favorite Fertilizer of Lakeland where worked for many years; and his last sales position was held with Triangle Chemical Co. where even into his early 90’s he continued to work until his retirement a few years ago. He was a member of the First Presbyterian Church of Winter Haven where he was a former Elder, a member of the Polk County Board of Realtors, and several Winter Haven organizations. Billie loved old gospel hymns, working for his customers, and socializing with his family and friends. Billie was preceded in death by his wife of over 60 years, Merry Wadsworth Garrett and his parents, John Avill and Lottie Smith Garrett. He is survived by his special friends, Mrs. Ruby G. Moody, Fort Meade, FL, Jay and Linda Clark, Wauchula, FL, and many other extended family and close friends. Special thanks go to the Florida Presbyterian Homes of Lakeland and the heroes who work there. The kindness and compassion bestowed by each one who cared for Billie will always be remembered and appreciated. Visitation will be held from 10:00 a.m. – 10:30 a.m., with funeral services following at 10:30 a.m., Friday, October 23, 2020 in the chapel of Oakridge Funeral Care, 2425 Havendale Blvd., Winter Haven, FL 33881. In lieu of flowers, donations may be made to: Bill and Merry Garrett Agricultural Education and Research Center, c/o Murray State University, 102 Curris Center, Murray, KY 42071 or to the First Presbyterian Church, 637 6th Street, N.W., Winter Haven, FL 33880.

WINTER HAVEN &#8211; Mr. Billie Buchanan Garrett, 96, passed peacefully into Heaven on Monday, October 19, 2020 in Lakeland, FL. Billie was born June 13, 1924 in McKenzie, TN and grew up in Gleason, then entered the U.S. Army where he served... View Obituary & Service Information

The family of Mr. Billie B. Garrett created this Life Tributes page to make it easy to share your memories.

Send flowers to the Garrett family.