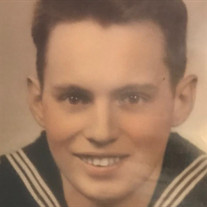 BOWLING GREEN - Mr. Charles E. Jones, age 88, passed peacefully at home with family on Saturday, September 19th, 2020. He was born January 9th, 1932, in Joliet, Illinois and had been a resident of Bowling Green for many years. Charles was the third of four children of Charles Edward and Maude Lightsey Jones. He was a graduate of Wilmington High School in 1950 then enlisted and served in the United States Navy from 1952 to 1955 during which time he was stationed in Key West, Florida where he hitched hiked every weekend to Fort Meade, Florida to court Ms. Janice Gail Durrance. Charles married Janice September 29th, 1957 this year would have been their 63rd wedding anniversary. Charles was the owner and operator of Chuck’s Refrigeration and Air Conditioning and a Maintenance Mechanic at Alcoa from 1969 to 1994 where he also maintained status of head of the union. Charles had a passion for hunting and fishing and loved to take his bird dogs on a good run. He was a Godly man that lived his life by the bible and loved his family beyond words. Mr. Jones was preceded in death by his parents; sister,Francis Rutledge; brother, Robert Jones. He is survived by his one and only love and wife of 63 years, Janice Durrance Jones; daughter, Dottie Brownlee and her husband, Ricky; daughter, Carrie Serra and her husband, Wayne; son, Charles E. Jones Jr. and wife, Maria; his sister, Penny Jones Heggie; numerous grandchildren and great-grandchildren. A Celebration of Life service will be held on October 10, 2020 at 11:00 AM at the House of Praise, 3920 Murray Rd. Bowling Green, Fl. 33834 A family and friends gathering will be held after the service at Michael and Amber Doyle’s residence, 380 Bergquist Rd., Fort Meade, FL 33841. Memorial contributions may be made in Mr. Jones’ memory to: House of Praise, P.O. Box 142, Bowling Green, FL 33834.

BOWLING GREEN - Mr. Charles E. Jones, age 88, passed peacefully at home with family on Saturday, September 19th, 2020. He was born January 9th, 1932, in Joliet, Illinois and had been a resident of Bowling Green for many years. Charles was... View Obituary & Service Information

The family of Mr. Charles E. Jones created this Life Tributes page to make it easy to share your memories.

Send flowers to the Jones family.