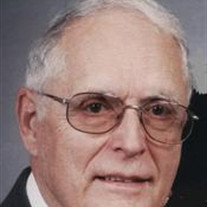 FORT MEADE - Mr. Charles W. Williams, 82, passed away Tues., May 29, 2012 at Bartow Regional Medical Center of heart failure. Mr. Williams was born in Blackey, Kentucky on August 27, 1929 and moved to Fort Meade from Cincinnati, Ohio in 1985. He was a retired Teacher and Administrator in the Ohio school system, and was also a former associate of Moody Funeral Home, and then later Hancock Funeral Home in Fort Meade. Mr. Williams was a member of the First Baptist Church, Fort Meade where he was an active deacon, Sunday School teacher, choir member, and member of The Joy Club. He was also a Gideon, member of the Fort Meade American Legion Post #23, and a U.S. Air Force Veteran, serving in Korea. Mr. Williams was preceded in death by his wife of many years, Marie W. Williams in Nov., 2011, and his son, Robert E. Williams in Oct., 2011, and several sisters and a brother. He is survived by his sister, Helen Majority, Knoxville, TN, and locally by his nephew and niece, Jim and Debbie Webb, Fort Meade, FL, and many other nieces and nephews. Memorial services will be held 11:00 a.m., Saturday, June 2, 2012 at the First Baptist Church, Fort Meade with Rev. Kenny Slay and Pastor Dan Brockman officiating. Hancock Funeral Home, Fort Meade 863-285-8171

The family of Charles W. Williams created this Life Tributes page to make it easy to share your memories.

Send flowers to the Williams family.