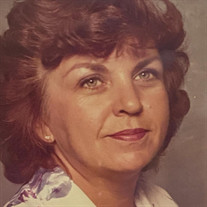 FORT MEADE - Fort Meade lost yet another of its own at 11:58 Saturday night, May 22,2021. Following a brief illness, Charlotte Westbrook Black took her last breath here on this earth and began her journey thru the pearly gates where her Mama was waiting. Charlotte was born February 9, 1935 in Eloise, FL to Wilbur and Wanda Vaughn Westbrook on February 9,1935, and grew up in and around Brewster and Fort Meade before she married and moved to Pennsylvania for 14 years. When she returned to Florida, she worked as a food server in various restaurants in the area, and while working with Little John Houvardas, she learned the restaurant business. Charlotte was a people person, and she had personality, knowledge and a vision to operate her own restaurant. Not only did she own and operate one, she took her dream to the next level and owned and operated three restaurants. The first vision was the Town House Restaurant on Broadway in downtown Fort Meade, which Charlotte created and ran for 20 years from 1980-2000, when Fort Meade was booming with the phosphate industry. She loved to feed the hungry men and women of our little town, which led to her second vision of another restaurant. When the Florida Orange Restaurant closed its doors on Highway 17 just south of the now, Patterson Park, Charlotte had a vision not only to feed the Fort Meade townspeople, but also the passers-by, so that they may have a better day traveling with her help of nourishment to them, and she opened the ‘Chuckwagon Restaurant’ for many years. Charlotte didn’t stop with two, the old quote, “three’s a charm,” is also what Charlotte saw in her future, and while the Chuckwagon was doing well in Fort Meade, she opened the ‘Chatterbox Restaurant’ in Plant City. Following Charlotte’s retirement, she liked to work in her yard and with her flowers, where she felt close to God and her mother’s teachings to her of the Pentecostal faith. Though she was retired, she just couldn’t put the recipes down. She not only collected recipe books, but sit and read every recipe book she could find, and when she went out of town, she would find the nearest book store and go straight to the cookbooks. Charlotte was dedicated to the people of Fort Meade in her restaurants for many years, and she fed thousands of hungry people, and because of her dedication to the people of Fort Meade, they in return remained dedicated to her.. She was preceded in death by her parents; her siblings, Ronald Clair Westbrook, Faye Fleury, Barbara Jean Wiggins and Jerry Eugene Westbrook. Charlotte is survived by her three children, Roderick (Rick) Black and his wife Teresa, Fort Meade, FL; daughter, Brenda Black also of Fort Meade, FL, and her baby boy Terry Lee Black and his wife Sandra, Duncansville PA; two grand children, Brinton Black and wife Justine, and Katelyn Black , both of PA; two handsome great grandsons, Theron and Henry Black; along with many loving nieces and nephews, and countless numbers of friends. A Celebration of Life will be held at 11:00 a.m., Wednesday, May 26, 2021 at “The Barn on the Lake,’ 8757 McCoy Road, Fort Meade, FL. in lieu of flowers the family asks that any memorial contributions be made to a charity that Charlotte supported for many years: St. Jude Children’s Research Hospital, 501 St. Jude Place, Memphis, TN 38105. Hancock Funeral Home, Fort Meade, FL 863-285-8171

FORT MEADE - Fort Meade lost yet another of its own at 11:58 Saturday night, May 22,2021. Following a brief illness, Charlotte Westbrook Black took her last breath here on this earth and began her journey thru the pearly gates where her Mama... View Obituary & Service Information

The family of Charlotte Westbrook Black created this Life Tributes page to make it easy to share your memories.

Send flowers to the Black family.