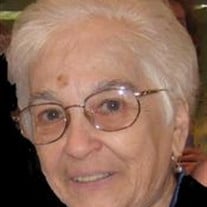 FORT MEADE - Mrs. Dolores M. "Dee" DeFina, 74, passed away at her home on Sunday, July 8, 2012. Mrs. DeFina was born on January 7, 1938 in Queens, New York and was a longtime resident of Fort Meade. She retired from the banking industry after... View Obituary & Service Information

The family of Dolores "Dee" DeFina created this Life Tributes page to make it easy to share your memories.

Send flowers to the DeFina family.