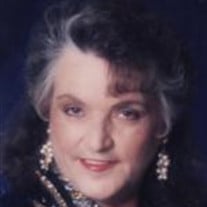 BARTOW - Mrs. Edna Hazel Spink, 68, passed away Thursday, Jan. 14, 2010 at Winter Haven Hospital of heart failure. Mrs. Spink was born January 6, 1942 in Perry, GA and moved to Polk County, FL from Georgia in 1974. She was a homemaker and... View Obituary & Service Information

The family of Edna Hazel Spink created this Life Tributes page to make it easy to share your memories.

Send flowers to the Spink family.