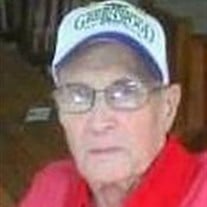 LAKE WALES - Mr. Howard R. Snow, 85, passed away Sat., Oct. 6, 2012 in Bartow, FL of heart failure. Mr. Snow was born in Cortland, Ohio on January 22, 1927 where he lived for many years, and moved to Lake Wales, FL in 2004. He worked for Wean United in Warren, Ohio for over 20 years, then going on to retire from the Cortland Bank in 1995. After his long tenure with the bank, he worked part time for Eagle Chevrolet in Hubbard, Ohio and Greenwood Chevrolet in Youngstown, Ohio. Mr. Snow served several terms as a Cortland City Councilman, and also served as Council President. He was very active in Cross Country and Track events as an Ohio High School Track Official, and was a member of the Youngstown Ski Club and took many trips with them. Mr. Snow was a sports fan of all high school sports, and he also had a great love for the Ohio State Buckeyes. He is a member of the Cortland Christian Church, Cortland, Ohio, Cortland VFW, and a WW II U.S. Navy Veteran. Mr. Snow entered the U.S. Navy at 18 years of age and served on both of the ships, USS Colorado and USS Cogswell. While deployed in the South Pacific, he witnessed the signing of the "Treaty of Peace" with Japan and also witnessed Gen. Douglas MacArthur sign the Japanese surrender document, "Instrument of Surrender." Mr. Snow was a very generous man and gave of himself and to charities as much as possible. Mr. Snow was preceded in death by his parents, Howard O. Snow and Helen Rice Snow, brothers, Robert Snow, Charles Snow, and sister Eleanor Snow Payne. He is survived by his sons, Keith A. Snow & wife Denise, Lake Wales, FL, Scott E. Snow and wife Marti, Dublin, OH; daughter, Holly Snow Elliott and husband Bob, Fort Meade, FL; grandchildren, April Snow Evans and husband Eric, Brian Snow and wife Lisa, Kelly Elliott, Ryan Elliott, Dustin Snow, Robby Elliott, Katie Elliott and Tom Snow; ten great-grandchildren, one great-great-grandchild, and many nieces and nephews. Mr. Snow is in a better place, keeping everyone entertained with all of his wonderful stories. Memorial services will be held in Cortland, Ohio in late November. Condolences may be sent to the family at www.hancockfh.com. In lieu of flowers, please send donations to The Rohr Home, 2120 Marshall Edwards Drive, Bartow, FL 33830. Hancock Funeral Home, Fort Meade, FL 863-285-8171

The family of Howard R. Snow created this Life Tributes page to make it easy to share your memories.

Send flowers to the Snow family.