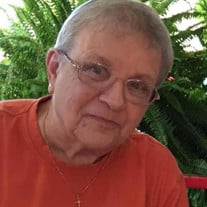 JEAN KINDLAND GURNOT (July 27, 1935 -- September 18, 2020) Jean Marie Kindland Gurnot, 85, died peacefully on September 18, 2020 at Bartow Regional Medical Center in Bartow, Florida with her loving husband at her side. It was too soon. Jean was born July 27, 1935 in Westline, PA, a daughter of John W. and Mary T. (Zampogna) Kindland, and she was a 1953 graduate of Bradford High School. On May 18, 1973, Jean married the love of her life, Donald L. Gurnot in Harborcreek, PA. He survives. In her long work career she was an operator at Bell Telephone, a waitress at the Ennis Hotel, an insurance salesman, and an account manager for Inland Container. During her time in the Altoona area, she also managed at stint at the slinky factory, James Industries. Jean loved camping with her family at Raystown and Chautauqua. She became quite expert at maneuvering the boat onto the launch. Many life-long friendships were born of those happy years. After she and Don retired to Florida, they continued to spend summers in Chautauqua for many years. She was proud of her Italian and Swedish ancestry and was a life-long member of the Vikings, Jamestown, NY chapter. Jean was devoted to the church. During her membership at Our Lady of Mercy Roman Catholic Church in Harborcreek, she became a Eucharistic Minister. She and Don were also tireless volunteers for Lenten fish fries and summer church festivals. Most of all, Jean loved her family. She loved trying out new recipes in the latest Southern Living Annual as well as contributing her own family favorites to community cook books. When there was a family gathering, the days were planned around the meals. She shopped for Christmas gifts all year long, looking for what was “just right” for each person on her list. Of course, sometimes those small gifts, squirreled away in March, were hidden so well, it might be the following summer before they were rediscovered. That brought us all as much laughter as the red Kauffmann’s gift box that was passed among us and reused until it fell apart. She was predeceased by her parents; a brother, Fred Kindland; a sister, Margaret Skok; and her former husband, Kenneth Hoadley in 1961. In addition to her husband of 47 years, Jean is survived by a son, John Gurnot and his wife, Brandee of San Antonio, TX; two daughters, Sue Hoadley and her husband David Coe of Glenmont, NY and Julie Hoadley of Sneads Ferry, NC; a granddaughter, Hilary Roberts and her husband Chris of Holly Ridge, NC; two great-grandchildren, Isabella Torrence and Erik Roberts; and three grand-dogs, Paris, Nicki and Melvin. In addition, many cousins, nieces, nephews and friends mourn her loss. The family wishes to thank the doctors, nurses and medical staff at Bartow Regional Medical Center for her excellent care. A memorial service will be scheduled at a later date. Hancock Funeral Home, Fort Meade, FL 863-285-8171

Send flowers to the Gurnot family.