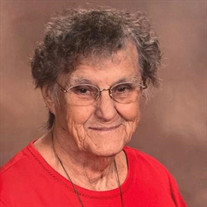 Fort Meade - Mrs. Kathryn Lightsey Reeves, 84, passed away Thursday, December 31, 2020 at her home in Fort Meade, FL. Mrs. Reeves, who was affectionately known to many as Kitty, was born June 3, 1936 and was a native and lifelong resident of Fort Meade. She was a member of the Fort Meade High School graduating class of 1954, a homemaker, and as she was always trying to make a better life for her family, she also worked part time at Peace River Packing in Fort Meade as a seasonal fruit packer, and also worked for several years for the Polk County School Board as a school bus driver, and as drive and ambition was a big part of her life, and she also worked for the Supervisor of Elections office at voting polls where she was needed. Helping others was important to Mrs. Reeves, and her out-shed of love that she showed to her family, friends, and anyone who needed a word of encouragement, was something she always did wherever she went, and always had a smile on her face. Many hours of her time outside of her home life were spent at the First United Methodist Church of Fort Meade, where she was a member the majority of her life. She served for many years as the president for the Methodist Women, and also served several years for the Methodist South West District Conference representing the Methodist Women group. Mrs. Reeves was preceded in death by her parents, John Wesley Lightsey and Inez Hancock Lightsey; husband, Jack "Red" Reeves, brother and sister-in-law, Jack and Joyce Lightsey; daughter-in-law, Denise Reeves; son-in-law, Billy Kersey; and grandson, Derrick Reeves. She is survived by her sons, Richard Reeves and wife Anita, Keith Reeves; daughter, Linda Reeves Kersey; all of Fort Meade, FL; sister, Florence Ann Pollard and husband Vince, Eagle Lake, FL; ten grandchildren, Michelle, Dixie, Jeremey, Crystal, Brittany, Aaron, Eva, William, Alex, and Cathryn; nineteen great-grandchildren; and six great-great-grandchildren. Visitation will be held from 1:30 p.m. - 2:30 p.m., Sunday, January 3, 2020 at the First United Methodist Church, 135 East Broadway, Fort Meade. Funeral services will follow at 2:30 p.m. in the church sanctuary with Rev. Bill Baldwin and Ronnie Mincey officiating. It is requested that masks be worn and rules of social distancing be applied. Interment will follow in Evergreen Cemetery, Fort Meade. Hancock Funeral Home, Fort Meade, FL. 863-285-8171

Fort Meade - Mrs. Kathryn Lightsey Reeves, 84, passed away Thursday, December 31, 2020 at her home in Fort Meade, FL. Mrs. Reeves, who was affectionately known to many as Kitty, was born June 3, 1936 and was a native and lifelong resident of... View Obituary & Service Information

The family of Mrs. Kathryn Lightsey Reeves created this Life Tributes page to make it easy to share your memories.

Send flowers to the Reeves family.