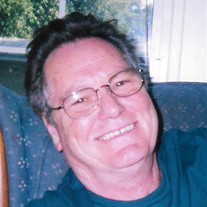 FORT MEADE - Mr. Larry Wayne Morelock, 69, passed away Friday, April 1, 2016 at his residence in Fort Meade. Larry was born August 13, 1946 in Big Stone Gap, VA and was a longtime resident of Fort Meade. He was a retired diesel mechanic for... View Obituary & Service Information

The family of Mr. Larry Wayne Morelock created this Life Tributes page to make it easy to share your memories.

Send flowers to the Morelock family.