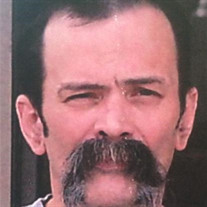 FROSTPROOF - Mr. Mark E. Heggie, 57, passed away Tuesday, Jan. 20, 2015 at his home in Frostproof. Mark was born July 26, 1957 in Joliet, IL and moved to Frostproof from Wilmington, IL several years ago. He was a truck driver, a U.S. Army... View Obituary & Service Information

The family of Mr. Mark Edward Heggie created this Life Tributes page to make it easy to share your memories.

Send flowers to the Heggie family.