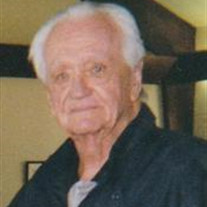 FORT MEADE - Mr. Richard H. "Dick" Davis, 86, passed away at his home Tues., August 13, 2013 of heart failure. Dick was born in Bloomington, IN on February 1, 1927 and moved to Fort Meade with his family in 1941. He graduated from Fort Meade High School in 1944 and then went on to serve in the U.S. Coast Guard. During his tenure in the U.S. Coast Guard, Dick was proud to serve his country and have the benefit of sailing around the world. After Dick returned home, he worked at the Hardee County Feed Store in Wauchula and then in his family business in Fort Meade, Davis Ford Co. Dick's love for sports gave him the opportunity to be a former Fort Meade Little League Baseball coach for the Dogie team. He was also an avid golfer, hunter, fisherman, and enjoyed spending time on his airboat with friends. Dick continued his family legacy and went on to be an entrepreneur as a Citrus Grower and Cattleman. He was a longtime member of the First Presbyterian Church of Fort Meade where he was very active in many facets and served as a deacon. Dick was preceded in death by his father, William Lamar Davis, Sr., mother, Ivelo G. Davis and his brother, W.L. "Bill" Davis, Jr. He is survived by his loving wife of 64 years, Janet D. Davis, Fort Meade, FL; sons, Richard L. Davis and wife Shelly, Robert P. "Sonny" Davis and wife Kimberly, all of Fort Meade, FL; brother, Joseph L. Davis and wife Audrey, Fort Meade, FL; four grandchildren, Andrew Davis, Michael Davis, Brandon Davis, Trevor Davis; two great-grandchildren, Kelsi Davis and Jacob Davis; and several nieces and nephews. Visitation will be held 1:00pm - 2:00pm, Friday, Aug. 16, 2013 at the First Presbyterian Church, 118 N. Pine Ave., Fort Meade. Funeral services will follow at 2:00pm with Rev. Jerry Connor and Rev. Jack Taylor officiating. Interment will be in Evergreen Cemetery, Fort Meade with military honors. Hancock Funeral Home, Fort Meade, FL 863-285-8171

The family of Richard H. "Dick" Davis created this Life Tributes page to make it easy to share your memories.