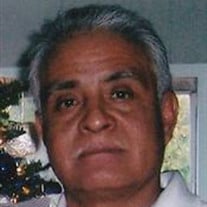 FORT MEADE - Mr. Richard Gonzales, 57, passed away Wed., Oct. 24, 2012 at Bartow Regional Medical Center of heart failure. Mr. Gonzales was born in Crosbyton, TX on February 9, 1955 and moved to Fort Meade from Michigan in 2008. He was a plant... View Obituary & Service Information

The family of Richard Gonzales created this Life Tributes page to make it easy to share your memories.

Send flowers to the Gonzales family.