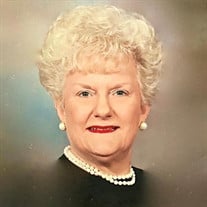 FORT MEADE – Mrs. Ruby Gillispie Moody, 88, passed away Wednesday, November 24, 2021 in Lakeland, FL. Mrs. Moody was born October 12, 1933 and was a native and lifelong resident of Fort Meade. In 2017 she moved to Florida Presbyterian Homes in Lakeland. She was a giving and outgoing lady who from a young age was taught to believe in hard work, helping others and serving God. By living and practicing these three attributes, she made a place in the hearts of many friends and her family. She was a community leader always helping others in need. Mrs. Moody grew up on a farm and had eight brothers and sisters. She graduated from Fort Meade High School in 1951 where she was a cheerleader and on the girls basketball team. While in high school, she was the first Youth Leader and Director of the First United Methodist Church. Soon after graduating from high school, she began working as a secretary at Florida Southern College. She was a lifelong member of The United Methodist Church where she was a Sunday school teacher and involved in many other church memberships and activities. Mrs. Moody retired after 30 years as an executive administrative assistant to three Polk County Property Appraisers. In addition, Mrs. Moody worked tirelessly alongside her husband, Dan L. Moody, who owned and operated the Moody Funeral Home in Ft. Meade for over 35 years. She was dedicated and supportive of her husband, Dan L. Moody’s longtime political career as a Polk County School Board member, Civic Leader, and Funeral Director. Her southern lady charm and heart felt nature of compassion and giving helped ease thousands of grieving families. She cared, consoled and made a lifetime lasting impression on everyone whose life she touched. Mrs. Moody served in various civic organizations, including membership in the former Fort Meade Beta Sigma Phi sorority, Fort Meade Chamber of Commerce, Fort Meade American Legion Post #23 Ladies Auxiliary, Fort Meade Garden Club, and a member of the Historical Society & Museum of Fort Meade. Away from work and home life, she loved just being out and around people. She loved traveling to various places, and traveled throughout the United States and internationally. Some of her best memories include spending time at her lake home, and at the beach on Longboat Key. But of all her accomplishments, Mrs. Moody’s greatest joy and pride were clearly her two grandchildren Mallory and Drew and her recent two great-grandchildren, Tommy and Danielle. She was preceded in death by her parents, Samuel Gillispie, Sr. and Mabel Colley Gillispie; husband of 52 years, Dan L. Moody; brothers, Sam Gillispie, Jr. and Charles D. Gillispie; sisters, Oleitta Mashburn, Teola Hollingsworth, Glenda Mullins, and Carolyn Swartz. Mrs. Moody is survived by her son, Daniel D. Moody, Esq. and wife Nancy; brother, Bill Gillispie and wife Jackie; sister, Dora Smith; granddaughter, Mallory M. Putnam, and husband, Tom; grandson, Andrew “Drew” Moody, Esq. and wife, Caroline; two great-grandchildren, Tommy Putnam and Danielle Putnam; and several nieces and nephews. Also, Mrs. Moody had a special love and bond with her husband’s family as if they were her own, namely, her parent in-laws: Eldora Bass and Bud Bass; sisters and brother in-laws, Fay Moody Protheroe, Norma Moody Aggelis, Paul Bass (all predeceased) and surviving sister and brother in-laws, Lorraine Bass Harrell and Roy C. Bass and their spouses and families. Visitation will be held from 6:00 p.m. – 8:00 p.m., Friday, November 26, 2021 at Hancock Funeral Home (formerly Moody Funeral Home), 945 E. Broadway, Fort Meade, FL. Funeral services will be held at 2:00 p.m., Saturday, November 27, 2021 in the sanctuary of the First United Methodist Church, 135 E. Broadway, Fort Meade with Rev. Bill Baldwin and Rev. Doug Harrell officiating. Interment will follow in Evergreen Cemetery. In lieu of flowers, for those wishing, memorial donations may be made in Mrs. Moody’s memory to: First United Methodist Church, 135 E. Broadway, Fort Meade, FL 33841; Emmaus Ministries Office of the Upper Room, 1908 Grand Avenue, Nashville, TN 37203; or to the Historical Society & Museum of Fort Meade, 1 North Tecumseh Ave., Fort Meade, FL 33841. Hancock Funeral Home, Fort Meade, FL 863-285-8171

The family of Mrs. Ruby G. Moody created this Life Tributes page to make it easy to share your memories.

Send flowers to the Moody family.